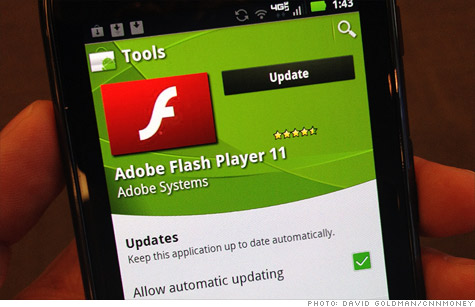 Somewhere Steve Jobs must be smiling. As you may have heard, Adobe last week admitted defeat in its long-running battle with Apple over Adobe’s Flash technology. As Apple’s CEO, the late Jobs barred Flash from Apple’s iPhone and other handheld devices and famously wrote an open letter last year explaining why.

Jobs complained that Flash was a buggy, insecure battery hog that wasn’t designed for touch devices like the iPhone and – thanks to the advent of new, more open technologies – had outlived its usefulness. Belatedly, Adobe seems to have come to the same conclusion.

The company announced that after an upcoming update, it would cease development of its Flash player software for mobile gadgets. Instead it plans to focus on HTML5, the same technology that Jobs touted last year.

This is a big retreat for Adobe. The company is abandoning mobile Flash little more than a year after it released it – and after spending years developing it. And the core of its new mobile strategy is a technology that just last year Kevin Lynch, Adobe’s chief technology officer, said wouldn’t be able to replace Flash “in the foreseeable future.”

I guess we can say unequivocally that Jobs’ foresight was a lot keener than that of the folks at Adobe.

For consumers, this is a welcome move because it should mean that the Web browsing experience on mobile devices is going to get a lot better.

The promise of mobile Flash was that users would have the same Web experience, regardless of whether they were accessing a Web page from a PC, tablet or smartphone.

But the reality of mobile Flash was much different than its promise. Flash-based videos and games are often slow to load on mobile devices. Some of the older Flash content can’t be played in the mobile Flash player. And many Flash-based video websites block access to their content from mobile devices – even if those devices are running Flash. In sum, the experience was much worse than what you’d get on your PC.

I had eagerly anticipated mobile Flash and was disappointed that Apple didn’t include the technology on the iPad. But after playing with mobile Flash, I realized I hadn’t been missing much.

As any iPhone or iPad user knows, you can do plenty of things without Flash. Most Web videos these days can be viewed without a Flash player, and most of the major websites don’t require it. And with all the games available in the Apple App Store, Apple device owners aren’t missing Flash games.

Adobe’s decision to kill off mobile Flash will push developers to ensure that all websites and content are mobile-friendly.

My biggest quibble with Adobe’s move is that it doesn’t go far enough. I’d like to see Adobe kill Flash on the desktop also.

Flash was a crucial technology during the past decade. While the browser makers were fighting over Web standards and companies like Apple, Microsoft and RealNetworks were battling over how to deliver streaming audio and video, Flash provided something of a lingua franca.

It allowed users to view dynamic Web pages no matter what browser they were running or operating system they were using. It allowed consumers to play games directly within Web pages. And it became a standard way for delivering streaming media, freeing users from worrying about whether they had the right version of QuickTime or Windows Media Player to listen to a Web broadcast.

But the times have passed Flash by. Web standards have become more sophisticated and more widely supported. Developers can now stream video and audio, and offer sophisticated applications and dynamic menus without resorting to Flash.

Meanwhile, the downsides of Flash have become more and more apparent. In short, Jobs was right. In part because of its ubiquity, Flash has become an inviting target for hackers; the software has become one of the biggest security vulnerabilities on PCs.

What’s more frustrating on a daily basis is just how unstable Flash is. Flash crashes my browser nearly every day – and that’s on a Windows machine, where the software is supposedly more robust. Anecdotes from other users indicate my experience is not unique.

In defending Flash from Jobs’ attack last year, Adobe co-founders John Warnock and Charles Geschke painted the dispute as one about freedom, openness and consumer choice. Adobe’s move is a recognition that consumers, platform operators and developers are choosing to flee Flash to embrace an even more open technology and some other important freedoms, such as being liberated from Flash’s crashes and security holes.

So I’ll be glad to see Flash go away. Somewhere Jobs is saying, “I told you so.”